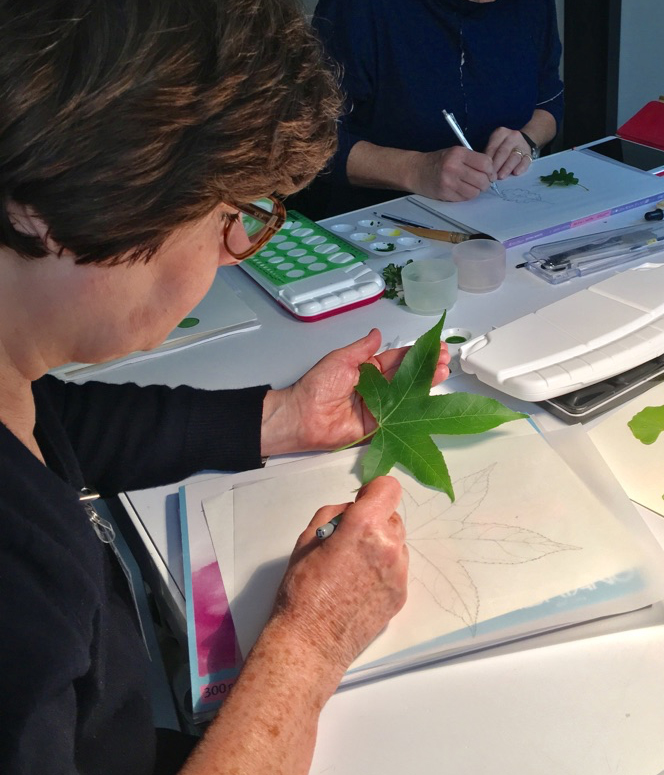 The way we do it. Photo credit: Santisouk Photography.

Digital devices in botanical art is a somewhat controversial topic nowadays. Some won’t touch it with a ten-foot barge pole. I will; I feel strongly about it.

Recently, an artist posted on social media to say that he had purchased all of my coloured pencil e-booklets. He wrote that he had found them very useful. He also kindly added: “I recommend all of them”.

But then, quite innocently it seems, he stumbled into the use-of-digital-images-in-botanical-art controversy. He included images of him tracing one of his own digital images of leaves apparently right off a computer monitor. By way of explanation, he pointed out that he only uses his own images. That is commendable and unlike many would-be artists who, without conscience and ignoring copyright protections, plagiarize the images of other photographers. But it’s still not okay.

I applaud his transparency which is in sharp contrast to, for instance, workshop participants who do the same thing but pretend that their tracings are of their own drawings of live subjects. This is of course silly because an experienced instructor can easily detect a traced photograph or digital image. The same applies to a painting sourced entirely from a digital device. A discerning eye can immediately see that the colours, particularly the greens, are saturated and unnatural.

Some of these artists attempt to explain away the use of digital devices instead of actual specimens as “contemporary”. However, I believe that it’s most often due to inadequate drawing skills. And in some cases, an inability to colour match accurately to an actual specimen. Furthermore, in an art context, this is an inaccurate use of “contemporary.” “Contemporary” refers to the art of today, produced in the second half of the 20th century or in the 21st century.

We do have contemporary devices such as smart phones with cameras that provide us with great reference material after the plant has expired. As we all know, the time taken to create a botanical art piece typically exceeds the lifespan of a plant specimen, particularly if it is separated from the subject plant. Under these circumstances a digital reference is very useful. But note, reference, not source. This is not an invitation to carte blanche use of digital devices in botanical art.

So clearly, the practice of tracing from a digital source cannot be called “contemporary” botanical art. You can call it contemporary plant art, or nature art, but it is not botanical art in the time-honoured spirit of the genre. Botanical art has a long history and deep-rooted association with botany, and aesthetics, and of always depicting the plant scientifically accurately as sourced from specimen material.

And likewise, substituting “modern” for “contemporary” doesn’t work either. In art terms “modern” refers to original works created roughly between 1860 and 1970. It has nothing to do with a style or a genre.

We won’t maintain this genre’s high standard and unique and distinctive history by lowering of the bar. That’s deluding ourselves. We’ll only do it by practicing until we can clear the bar, and that includes learning to draw and colour match from live specimens.

This is a consistent theme you’ll find in all my workshops and e-booklets.